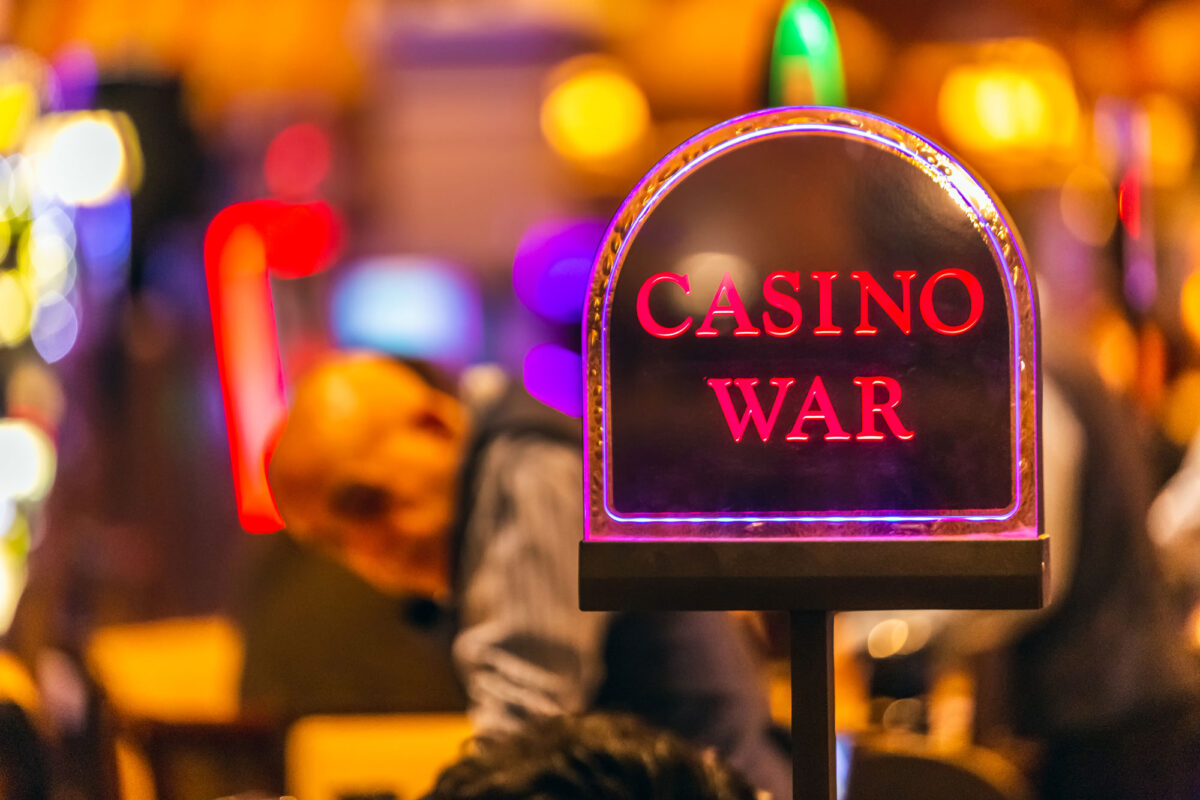 “War” is the first card game many children learn to play around the kitchen table. The concept is simple. A standard 52-card deck is divided into two piles of 26 cards each. The two players simultaneously draw the top card from their piles and lay them down, face up. Whoever has the highest card takes both. When all the cards have been played, the player with the most cards wins.

It’s just about the easiest card game you can play. There’s no thinking, no strategy, and you can play the entire game in under a minute. A slightly beefed-up version of this simple game was introduced to casinos more than 25 years ago, named appropriately “Casino War.”

In the early 1990s, the casino industry was experiencing a bit of a table game boom. Hybrid versions of such classics as Three-Card Poker, Let It Ride, and Caribbean Stud came to casino tables and proved very popular.

A small, Reno-based company named BET Technology wanted to strike while the iron was hot, and it developed the classic game of War into a table game that could be played in a casino. Five casinos in Northern Nevada picked it up in 1994, and within a short time, Casino War had made it to Vegas and beyond.

Just as in the classic game of War, Casino War is played between two people — the player and the dealer. A standard 52-card deck is used (most casinos use a six-deck shoe). Before the cards are dealt, the dealer calls for bets. Each player places a bet on whether their card will beat the dealer’s card, putting their chips in the betting space.

If both players have the same card — a tie — the player has two options. They can surrender, losing half of their original bet, or they can “go to War.” If they choose War, the player must double their original bet before the next cards are drawn. The dealer places an equal amount in the player’s betting space. The dealer then discards three cards and deals a second card to the player. Next, they discard three more and deal a second card to themselves. If the player’s card is high, they keep all three wagers. They pocket two of them, and the third one pushes to the next round.

If the result of the War is another tie, the player keeps the extra bet they made on War, and they use the original bet for the next round. Some casinos pay out a bonus to the player if the War ends in another tie.

In the event of a tie, the player can place an additional “tie bet,” which bets that their card will tie the dealer’s card. A winning tie wager pays 10 to 1.

The cards are ranked the same as they are in standard poker games. Aces are high, and there is no advantage of one suit over another. Players must place bets before the dealer draws any cards, and when the dealer announces “no more bets,” players cannot change their wagers. Although there may be multiple players at a table, each player is playing only against the dealer. Other players’ cards or bets have no effect on others at the table.

You can find more about the rules and strategies of Casino War here.

Some of the common terms used in Casino War are:

Statistics have shown that the player has a slight advantage over the dealer in Casino War, with players winning the initial round a little more than 50% of the time. This makes it one of the only casino games where the player actually has an edge.

Experienced gamblers tend to avoid Casino War because of its almost complete lack of strategy. There are really no decisions to make — it’s just a rapid-fire game of chance. The most interesting element is the tie bet because of the 10 to 1 payout, but the chances of winning are very low.

Casino War is one of the easiest cards games you can play in a casino, and it’s one of the only games where the odds are actually in favor of the player. You’ve got a good chance of going home with some extra cash in your pocket! Play is fast, and there are no complex strategies or tricks that you need to know. Just sit down, place your bet and see how the cards fall. And if you go to War, get ready for the thrill of winning three times your original bet — or even a 10-to-1 payout if you win the tie bet! Casino War is fast and fun, and it’ll bring back great memories of playing around the kitchen table when you were a kid!

Visitors of Resorts World New York City are welcome to enjoy a game of Casino War (and more) in its electronic version. Same level of excitement guaranteed!