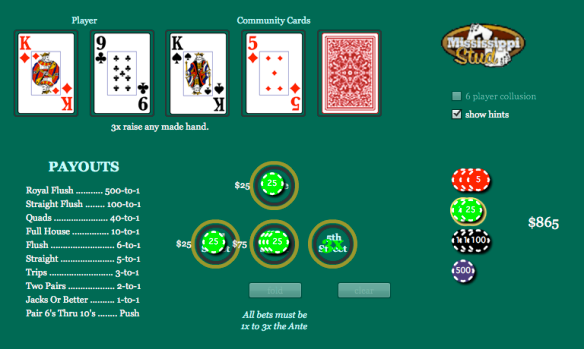 What is Mississippi Stud?

A lot of things. Yes, it’s a poker game — one that is part of the New School poker games that are getting younger players into poker. It’s also a fantastic casino table game. Its strategies are easier to learn than traditional poker, and the house has a lower inherent advantage than in blackjack.

To become a solid Mississippi Stud player, you just need to get a feel for how much to raise (or fold) your bets as new cards enter play.

Below we’ll take a look at where this game came from and how it’s played.

You know how some games, like chess and poker, have histories that date back to the Precambrian Era and are sprinkled with glamorous trans-oceanic migrations, cross-cultural adaptations, and sordid love affairs?

Mississippi Stud is not one of those games.

In fact, Mississippi Stud is so young that, if you’re legally allowed to read this, you are older than it.

One day, brainiac and Shuffle Master CEO Mark Yoseloff came up with the idea: what if he could up the ante of a game like Let It Ride?

In Let It Ride, players are allowed the option of making additional bets. However, Mississippi Stud makes them mandatory — if you don’t make a bet, you fold.

So you could also name it something like Let It Ride With a Gun to Your Head. It’s fast, it’s awesome, and it’s absolutely impossible not to have a good time playing it.

Anyway, Mark Yoseloff came up with the idea and fast-tracked it through his company. For around five years, there were only one or two places in the US that played Mississippi Stud. Then the game suddenly took off. Now you can find it practically anywhere, and with the number of talented players continuing to grow, it’s not going anywhere anytime soon.

How to Play Mississippi Stud

The game begins when a player makes their ante wager and receives two cards. The dealer deals three face-down community cards as well. The goal here is to end up with at least a pair of 6’s. If a player has a pair of 6’s through 10’s, they can push and return all bets. If they have a pair of Jacks (or higher), that’s when they can start receiving payouts.

A paytable is used to determine how big the payout is. A player can make three moves: fold their bet, play 1x their ante, or play triple their ante. After this move, the dealer turns over the first community card. The player must again choose one of the three moves. The dealer then turns over the second card, and the player chooses again.

After the final betting round, the dealer reveals the final community card, and the winning hands receive payouts.

Knowing whether to fold or raise your bet is the crux move of Mississippi Stud. If you have a pair of 6’s in your first two cards, you are guaranteed not to lose. Depending on what you pull, you could win significantly. For instance, with Trips, a $5 player could win $150, and with Quads, they could win $2,000.

This is the exception and not the rule, of course. The odds are always against the unicorn hand, so you have to know where to give it gas and where to step on the brake.

A proper Mississippi Stud strategy sees you folding nearly 1 out of 3 times after you’ve seen your first pair of cards. This means you will likely fold early — and the fold rate is 45% in total.

It’s advisable to bet 3x if you get any of the following hands upon viewing the first community cards:

If you have the following hands, you’re best off betting 1x your ante:

Fun, fast-paced, and always riveting, Mississippi Stud is a newcomer that’s gained solid street cred in casinos worldwide. Get a solid understanding of its pacing and know when to fold, go 1x, or go 3x — you’ll be cooking in no time.

If you’re looking for a game that you can get good at in record time, consider Mississippi Stud. The biggest challenge will be getting back to regular life and not spending all daydreaming of new strategies. It’s just that fun.

Visitors of Resorts World New York City are welcome to enjoy a game of Mississippi Stud (and more) in its electronic version. Same level of excitement guaranteed!